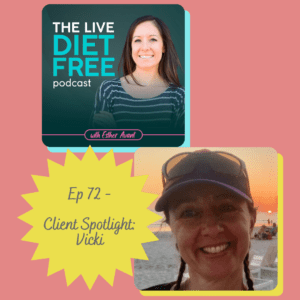 In this client spotlight episode, I’m talking with our incredible client, Vicki.

Vicki is a non-profit executive director and mom of two teenage girls.  She also celebrated her 50th birthday last year, which felt like a major milestone and was one of the factors that led her to try coaching.

She says, “I guess when I look back on my life, I’ve really always kind of wished I was thinner or wished I ate better.”

Vicki loves the outdoors and has always been active, so exercise wasn’t really an issue for her.

Until the pandemic and menopause hit at the same time!  She says everything started to feel out of control and she didn’t know how to get back on track.

She’d slowly gained weight over the years as a result of putting her own needs on the back burner to prioritize work, motherhood and many other pieces of life.

And while she doesn’t regret those decisions, things finally came to a head.  She felt stressed, panicked and out of control.  She felt like she had tried it all and knew she needed to figure it out.

Like many women I talk to, Vicki pretty much knew the things she needed to do to lose weight.  Accountability was what she was really missing, particularly when it came to nutrition and diet.

Vicki worked with Coach Amber to focus on one or two goals at a time, rather than jumping into everything at once (which had left her overwhelmed in the past).

She found that over time, things started becoming easier, more routine.  She developed some great new habits and learned to adapt when things weren’t going exactly as planned.

The mindset piece of coaching has been huge for her, too.  She says, “I’m kind of astounded at the stories I’ve told myself…about me over the years.”  The mindset work and creating new beliefs about herself is what’s really allowed her to make changes and stick with them.

After 4 months, Vicki no longer feels like her new habits are something she “has to” do.  They’re just the things that she’s doing and it feels so much easier already.

Not to mention, her clothes are fitting better, she feels more confident and like she can do more – like the big bike rides she’s planning.

She’s claimed responsibility for her own results, shifted her priorities and is loving the outcome!

Vicki says, “It is the best money I have spent on myself in forever… It changed my life. I would do it 100 times over again.”

Listen to the full interview now.

If you are loving this podcast, please subscribe, rate and review! This helps even more people discover how to change their lifestyle, lose weight and live diet free.

And as a special thank you, if you send me a screenshot of your rating and review, I’ll send you my Weekend Survival Guide for free. This guide is typically only available to my clients, so you know it’s good!

Send your screenshot to admin@estheravant.com with the subject “Podcast Review”.

And if health weight loss is the area that you’re struggling in, please reach out to me, talk to our team, we can help you with this. 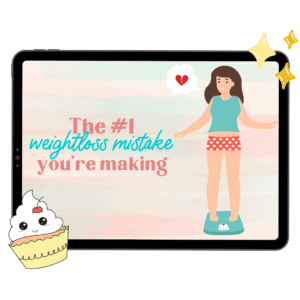 Find out the #1 weight loss mistake you're making

If you’re tired of gaining and losing the same weight, feeling like you’re the only person out there struggling, and want to learn how to lose weight and live your healthiest, happiest, and most confident life – without perpetual dieting – this podcast is for you.

Fitness industry veteran, certified personal trainer, sports nutritionist & coach, Esther Avant, will help you learn how to enjoy the process of truly changing your lifestyle and guest interviews will help you realize you are not alone in your struggles.

113. Busting All Your Holiday Excuses

When it comes to the holidays, it can feel like you’re constantly being told to eat this, drink that, skip your workout and hit the stores for some shopping, and you better not turn down great-aunt Sue’s famous pie or she’ll never forgive you.

How are you even supposed to navigate all of the opportunities to overindulge with not knowing how to say no, feeling like you should treat yo’self, and traditions all revolving around food.

It may not be easy, but the solutions are simple and I’m here to help you bust all of your holiday excuses.

Is traveling one of the big monkey wrenches that’s making it impossible to lose weight?

Whether you’re traveling for work or for pleasure, you don’t want to miss this:

Kerri is down 45+ pounds over the last 15 months while traveling multiple times per month and she’s dishing all her secrets on this week’s episode of the Live Diet-Free podcast.

Steal her and Coach Meg’s best tips to go from constantly stressing about upcoming trips to navigating them – and their temptations – with ease!